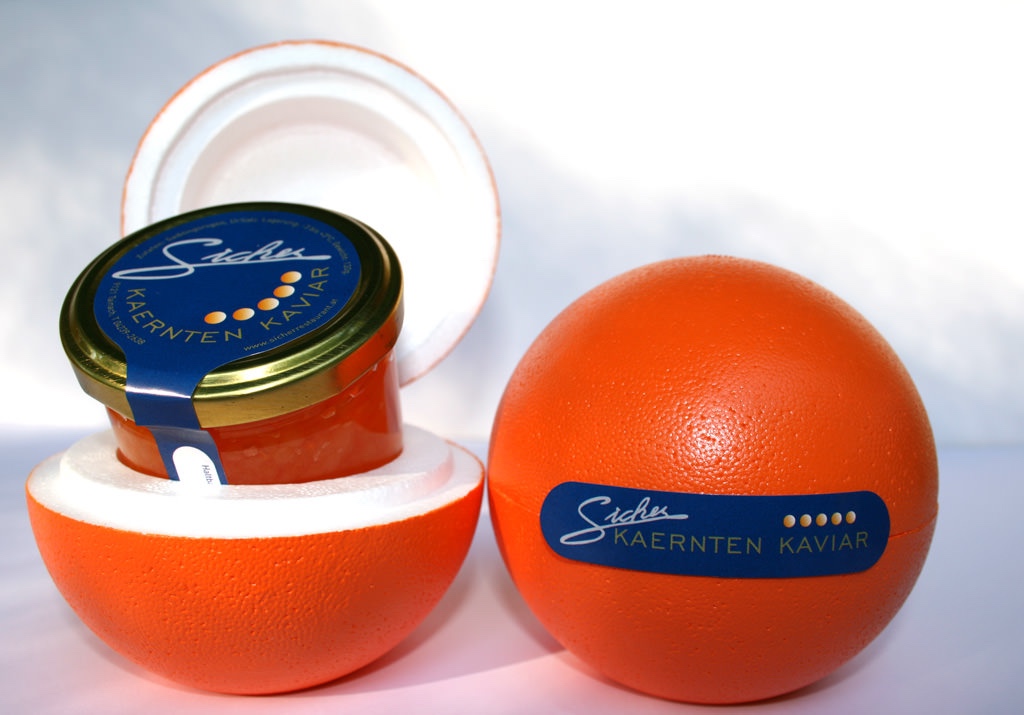 Char caviar is harvested from the end of October until the beginning of December, whereby the considerate and species-appropriate keeping of the fish is a highly important concern of ours. Our fish are not harmed in any way during the harvesting process, and the roe is only harvested at the peak maturity level.   You are therefore presented with a product from happy fish, whereby the quality of the product is emphasised only by a mild seasoning with top quality salt. This allows our char caviar to keep for up to 6 months, when kept at a constant temperature (+3 to -3 degrees celsius). We sell and ship the caviar directly from our restaurant and offer the following products:   130 g SICHER Char Caviar (á € 42,00) 130 g SICHER Char Caviar - Gift packaging (á € 47,00) 200 g SICHER Char Caviar (á € 63,00) 250 g SICHER Char Caviar (á € 75,00)   For inquiries related related to our caviar, please contact us via telephone or using the form here. Minimum order quantity 2 glases Char Caviar.

The culinary heritage of the Alps – The Cookbook

Austria, a land of enjoyment – What the Kitchens and Cellars have to offer

Char belong to the salmonid family, and have slender, long bodies with flat heads. The body shape is very comparable to that of trout, however, the mouth is wider and the tail fin is significantly indented. Char require a habitat with very high water quality, and therefore inhabit oxygen-rich lakes or rivers – which is why they are only rarely kept in pond-farming systems.

Originally, char were to be found in the USA, and were only introduced to Europe in 1884, when they were put in suitable lakes and rivers. Char is highly desirable in cooking, as it has delicate yet flavourful flesh. It is most often prepared similar to trout, larger fish are prepared similar salmon trout or lake trout.

If you are to discuss four dishes for a book publication with Michael Sicher, you may want to have a food-encyclopaedia on hand, or at least be ready to ask Google – unless you wish to come across as a gastronomical layman! We at least wanted to convince the Carinthian Michael that we are capable of pronouncing the often impressive names of his gastronomical creations! Therefore, it is nice to know that he, both as a chef and as a fish farmer, also enjoys working with less exquisite ingredients.

“I don’t need lobster, foie gras or scallops. I aim to bring the local products to the foreground in order to show how they can be just as impressive as other more exquisite ingredients. ”

Sauté the finely dices shallots in butter, then add the risotto rice and allow also sauté briefly. Add the white wine, then add some of the vegetable stock, allow to simmer and, whilst constantly stirring, add the remaining stock bit by bit, until the rice is cooked. Shortly before assembling the dish, add the diced celery, a dash of olive oil and Pernod, then season to taste with salt and pepper.

Season the trout filets with salt, pepper and lemon juice, then roll them up. Vacuum pack the rolls with a dash of olive oil, then cook in steam for 3-4 minutes at 95°C. (If you do not have access to vacuum packaging, the rolled filets can be wrapped in clingfilm individually, tightly twisted at each end.)

Assemble the risotto on your plate, then place the rolled filet in the centre, add a tablespoon of sour cream and place the char caviar on top.

Amongst Austrian gourmets, the restaurant “Sicher” in Tainach, Carinthia has been a well-known attraction for many years. However, Michael Sicher’s char caviar is now known well known even beyond Austria’s borders. The Sicher char caviar has found its place in the top gastronomy all over Europe. With the recipes in this book, Sicher clearly proves that he is highly experienced as a fish chef. He has experimented with the different kinds of roe of Austrian fish, so that we can enjoy these culinary highlights.

Mix the flour with the egg, salt, oil and enough lukewarm water to form a firm pasta dough and knead. Let the dough rest for at least 1 hour. In the mean time, cook the potatoes in their skins until soft, then peel them and pass them through a potato ricer. Mix the mashed potato with the sorghum, curd cheese, mint and chervil. Season the mixture with salt and pepper then fill into a piping bag.

Pass the dough through a pasta roller multiple times, until the dough is a thin sheet. Cut out circles (7cm diameter) and pipe some mixture onto the circles. Place another cut out circle on top and seal well. Cook the Kasnudeln in boiling, salted water for 3-5 minutes.

For the cream-cucumber, peel the cucumbers, remove the seeds, then dice into small cubes. Mix with sour cream, lemon juice, olive oil, salt and pepper.

Melt the butter in a pan, add the breadcrumbs and toast until golden brown.

Arrange the Kasnudeln and cream-cucumber on a plate, then top with toasted breadcrumbs and the trout caviar.

Freeze the char filets for roughly 40 minutes to firm them. Slice the filets into thin slices and arrange on a plate, then season with salt and pepper. Using a stick blender, purée the shallots, olive oil, lime juice and basil, then marinade the slices of filet with the purée. Add a tablespoon of sour cream to the centre of the plate, then top with char caviar. Decorate the carpaccio with edible flowers and herbs.